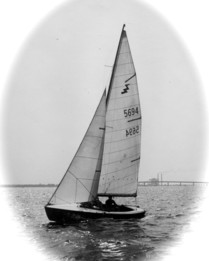 As a child who spent summers at the Jersey Shore, Brad soon developed an interest in boats, particularly sailboats. At age 11, Brad took up sailing at the Hobby Haven Sailing School in Ocean City, NJ. Soon he was racing his Lightning on weekends in Fleet 99 on the Great Egg Harbor Bay. By age 13, Brad was teaching sailing at Hobby Haven.

While majoring in biology at the University of Pennsylvania, he raced on the college sailing team. After graduating, he took a short -term job building small sailboats with a local boat builder. Short term became longer term. Brad began to make more then the boats, he started making the sails for these small boats which included Sunfish, Comet, Moth, and GP-14. As the demand for new sails and sail service grew, Brad opened his own loft in Audubon, in1974.

In addition to racing Lightnings, Brad has sailed several other classes of small boats. Presently, he races a Laser in the New Jersey area. Brad has also raced off-shore events including the Newport to Bermuda Race. Brad and his wife, Valerie, spend several weeks each winter sailing with friends in the Caribbean and Central America. 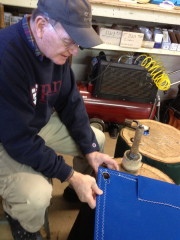 Brad installing a pressed ring in a new genoa.

Brad has combined his love of sailing with his scientific education to create a sail making career that has lasted for nearly 40 years. It’s easy to see why Brad is confident in claiming that he is the most experienced sail maker in the area.

Today, the loft in Somerdale, NJ makes primarily racing and cruising sails for sail boats in the 20 to 45 foot range.   The loft also provides smaller sails and canvas items. The loft is open throughout the year providing new sails, sail cleaning, sail repair, and sail modification. 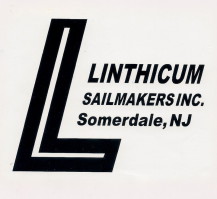 We are also available evenings and weekends by appointment.

Serving the sailing community since 1966

We do what we say we are going to do.

We do it when we say we are going to do it.